Web design trends are fickle, but one thing will always be constant: nostalgia wins every time.

The latest web design trend, brutalism, French for "raw" is a nod back to minimalism in barebones fashion. On the Internet, we see this example most prominently mixing in with 90s aesthetic, primarily in how websites and digital experiences are being turned back into raw, barebones looks.

Among the myriad examples, Arcade Fire's latest album/tour promotional website references Windows 95-esque icons and an "infinite content" feature that throws up pop-up after pop-up with tour date info, music videos, and other things. While it harkens back to the frustrating days of dial-up, it channels the nostalgia of "hand-made" html websites while subverting them in a modern twist. 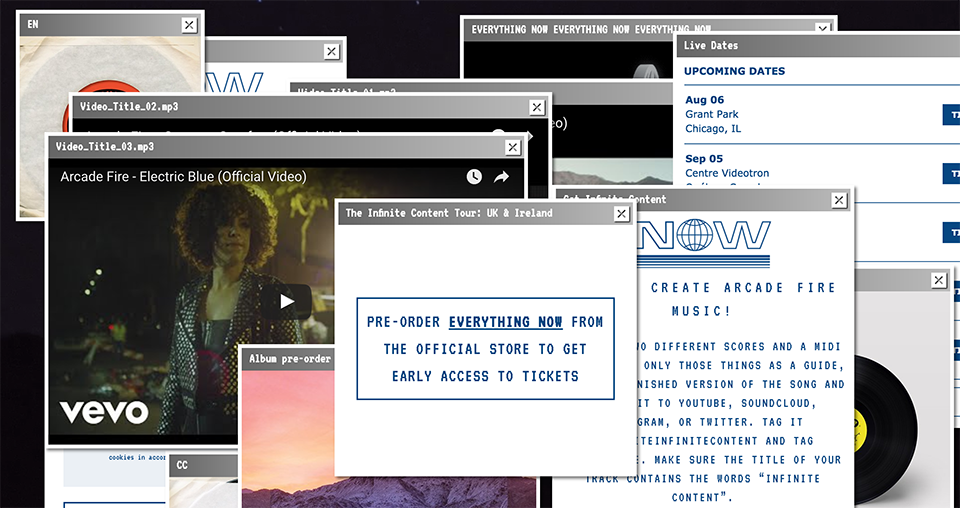 Our graphic designer Lauryn says that return to minimalist code style within the umbrella of 90s nostalgia falls in line with what we’ve been seeing for quite some time now:

Literally everything is cyclical, if you look at the whole history of art and design you’ll find there have been like five original things. Everything else is just borrowing and remixing. Tumblr started moving really fast on collaboratively creating aesthetics, among other hubs, and those styles rip through the internet and get remixed and rebuilt constantly. If you look at Vaporwave and Seapunk, those were a trend starting in like, 2015 and we’re seeing a LOT of aesthetic borrowing from those trends.

Remixing and reusing is a common phenomenon, but the permeance of 90s aesthetic perhaps alludes to something even deeper that makes it all the more relevant to millennials, and those who were just starting to develop:

So it’s not just borrowing from the aesthetic of the early internet, but from like, Nickelodeon and cartoons and cereal boxes and stuff — definitely designed to appeal to *kids* in the 90s

Brands have discovered the power of being irreverent and conversational and that’s turned into this whole new tone to all of our interactions. Look at how the Panthers were secretly tweeting the words to Fresh Prince theme song.

The 90s were the last time that a lot of people didn’t feel like there was a constant threat hanging over our heads. For a lot of millennials that was pre-middle school and for some at the younger end, it’s pre-solid memories. It’s a time that’s hazy enough for a lot of people to be easily idealized. So yeah it totally makes sense that we’re all turning to a time when things felt more stable and the stakes weren’t so high.

Whether you want to learn how to design in Brutalist fashion, or try your hand at the 90s aesthetic, check out how our upcoming courses in UI and UX can benefit you.