Written by Lauryn McCarter on February 28, 2017

I didn’t watch the Oscars this year, because, like every year, I didn’t have 75 hours of free time to watch a bunch of HOLLYWOOD ELITES congratulate themselves while wearing outfits that cost more than my annual rent. But when I woke up on Monday, the part of me that loves drama was thrilled to see that a Keystone Kops episode had unfolded on the Dolby Theatre stage during the announcement of the most important award of the night. It was like all my anxiety nightmares got together and happened to someone else!

If you somehow missed it: when it came time to announce the Best Picture winner, presenters Warren Beatty and Faye Dunaway read out La La Land, which had been bookmakers’ favorite to win. As the producers made their acceptance speeches, staff swiftly acted to inform Beatty and the La La Land team that a mistake had been made and the winner was, in fact, Moonlight, the underdog contender.

I’m not just a snarky internet jerk; I’ve actually seen this situation from every angle. I’ve been a producer, a stage manager, and an awards show presenter, and I’m a graphic designer now. Why does being a graphic designer matter? Well, I’ve never had my hands on a production the size of the Academy Awards, but it’s how I, a lowly peasant, can tell you what could have prevented the kerfuffle: better UI.

Here’s a quick breakdown of how an Academy Award goes from votes to envelope to the winner’s hands: auditing firm PricewaterhouseCoopers* tabulates the votes by members of the Academy, and prepares two briefcases with two sets of envelopes containing the winners. Two senior PwC employees escort the briefcases to the theatre and are stationed on each side of the stage to hand the envelopes to awards presenters. (If you watch the video of La La Land producer Jordan Horowitz announcing Moonlight as the real winner, you can see them milling around in the background confusion.)

When you’re creating a user interface (UI), you want to set your users up for success. In apps and websites, this means building in cues that tell your user how to interact with your content. With the stakes as high as they are at the Oscars, you hedge your bets by giving your users (in this case, presenters and the PwC ballot officials) failsafes to prevent errors. From where I’m sitting, there were two major breakdowns in the User Interface that led to The Great Academy Award Robbery.

The award presented before Best Picture was Actress in a Leading Role. Somehow Beatty was handed the second envelope for Actress rather than Best Picture. The winner of each award keeps the envelope with their name, eliminating one of the two from accidentally being handed off, but what happens to the other one? Here’s where good data sanitation is important: clearly marking, or even destroying, the envelopes for already-distributed awards would make it easier for ballot officials to see when they have the wrong envelope in hand, providing a nice clear “interface.”

Speaking of the envelopes, how did that mix-up occur? We don’t know exactly, yet...

There's small, lightweight type on a dark color! It’s easy for dark colors to swallow lightweight type. Backstage areas are dark and, no matter how well produced, chaotic. While it looks stylish, it doesn’t lend itself to being easily read under the conditions it was going to be in. A better design for readability in high-pressure, low-visibility situations — larger type, a heavier font weight, a higher color contrast between type and background — could have made it easier to catch before Beatty received the envelope or walked onstage.

Also critical? The category of the award being presented is on the side of the envelope that faces away from the presenter. Pro tip: Do NOT rely on the 79-year-old man who’s about to go onstage at a high-energy event to double-check the small type on the side of the envelope that he won’t be looking at! Here’s another spot where thinking about how your user is going to interact with your product can lead to a smoother experience. By doing user research — e.g., watching presenters at awards shows, or asking a performer to go through the motions of announcing an award — a designer could notice that presenters usually only keep the flap side facing towards them. Why not also put the name of the category on that side? That would put in an extra opportunity for them to catch the mistake if they’re handed the wrong envelope.

Beatty clearly knew something was off as he was reading the card. When Horowitz later showed the card for Moonlight, we can see what the layout of the cards was.

The Oscars branding is at the top, the winner is in the middle, and the category, inexplicably, is at the bottom of the card. However, if we think about how the user interacts with the object, we can see quickly that this is completely backwards.

Nobody wants presenters fumbling around with the card and the envelope when they’re announcing a winner, so the card is placed in the envelope facing up and out (good interface design). This makes it smooth for the presenter to open the envelope and read the card while pulling it out in one easy motion. If the branding is at the top, they’ll go right past it and straight to what they think is the relevant information — the name in the middle of the card — before they’ve even pulled the card completely out of the envelope. Because why would they think there’s more, critical information below that?

As long as the handoff goes perfectly, there isn’t. But in this case, good information hierarchy would serve as a failsafe. If the category had been placed at the top of the card, following the rule “start general and get more specific,” Beatty would have seen immediately that he was not looking at the Best Picture card. He could have course-corrected before reading the wrong name, letting Dunaway vamp while he stepped backstage to get the correct card. It would still have been a mistake, but not one where you have stage managers frantically taking gold statuettes out of the hands of a gaggle of excited producers. 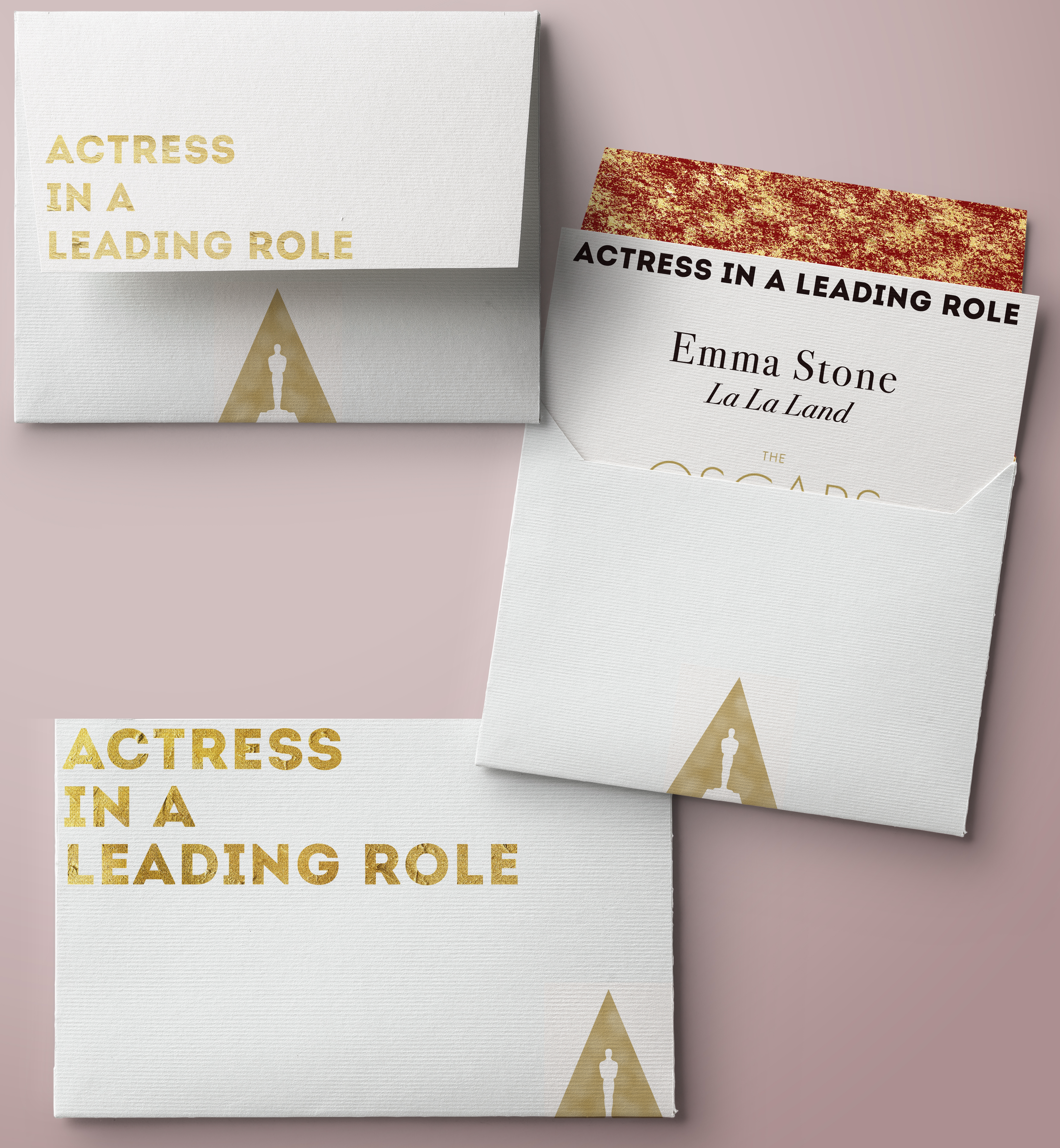 We’re all humans who err, and of course, awards shows are a meaningless shout into the void insisting that the art we produce will somehow change the unbearable truth that we’ll all be forgotten in a few generations. But The Warren Beatty Affair provides a nice case study of how smart design can invisibly ensure a smooth experience. Pay your graphic designer more to fend off oblivion.

*Full disclosure: my dad works at PwC, but has no involvement in the Academy Awards vote tabulation and, when asked what he thought of the gaffe, referred to La La Land as “Homeland” three times and talked about how much he didn’t like Jackie.